Plant a tree in memory of Hilda
An environmentally-friendly option 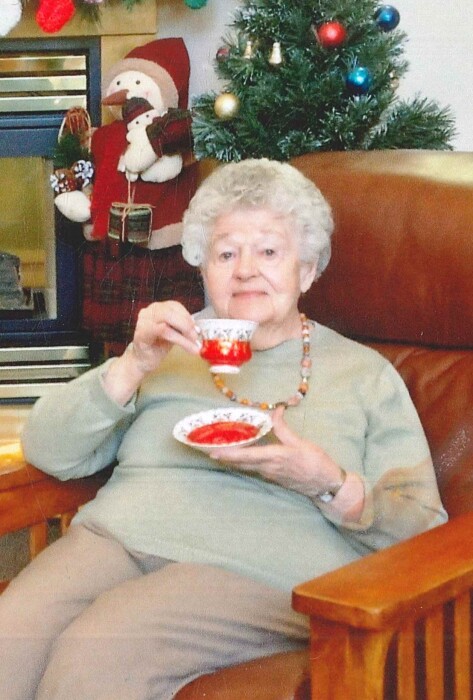 Hilda was born and raised in Stoke-on-Trent, England (the Potteries) to Alfred and Emma Hallam. She was predeceased by her loving husband Reg, son Keith, and granddaughter Tina. Hilda is survived by her sons Graham (Ginny), Randy (Mary Anne) and daughter-in-law Leona; 5 grandchildren Nikki (Joe), Leah (Leigh), Jason (Lily), Grant, Kevin (Taryn); and 5 great-grandchildren Jaime, Max, Audrey, Aryanna, and An. She was an Auntie to many nieces and nephews and has one surviving brother-in-law, Art Bennett.

She moved to London in 1937 to enter the nursing profession. Not long after arriving, the second world war broke out. During bombing, part of her duties was to run around the rooftop of the hospital and try and put out any fires with a squirt canister. In 1942 she met Reg at a dance, and they were married in 1943. In 1946 Hilda along with son Graham followed Reg out to Victoria. Here she made many friends and had two more sons, Keith and Randy. Over time she and Reg became very active and cherished members of the Victoria Truth Centre and she remained close to the church right up to her last days. In 2010 at the age of 90, Hilda moved to the Concorde Retirement Home in Penticton to be closer to her family. At the Concorde she made many dear friends, and the staff made her feel like royalty.

We would like to thank all the wonderful staff at the Concorde along with the Doctors and Nurses at the Hospice for their excellent care and kindness they showed her and to us. We shall miss her dearly.

No funeral by request. In lieu of flowers, donations may be made to Moog and Friends Hospice House, P.O. Box 1105, Penticton, B.C. V2A 6J9 or your local Salvation Army.

Plant a tree in memory of Hilda by clicking here.
To send flowers to Hilda's family, please visit our floral store.

Plant a tree in memory of Hilda
An environmentally-friendly option

Plant a tree in memory of Hilda

1 tree planted in memory of Hilda

A Memorial Tree was planted for Hilda Mary Bennett

Plant a tree in memory of Hilda